When super hot weather hits Hangzhou and breaks weather records, most people rush indoors to enjoy the air conditioning at work, home or in stores.

But that is not possible for some people whose work must continue under the glare of an unforgiving sun. They include traffic cops, garbage cleaners, security patrollers, delivery people, construction workers, and lifeguards, to name a few.

Those whose situation could be the worst are the garbage collectors.

Zhang Xiguo has been cleaning waste from the surface of West Lake for more than eight years. This summer it is suffering more than usual as there are more days with temperatures above 40 degrees Celsius than in previous years.

He drinks water “like crazy” to prevent dehydration and heatstroke, both of which are life-threatening. The surface of the lake is not as cool as people imagine, with waves of steam rising as early as 10 a.m. on some days.

“I drink 8 liters of water every day, but I’m always thirsty,” Zhang said. “I’m soaked after working for a few minutes.”

Zhang Xiguo picks up trash from West Lake. With the recent heat waves, the job has many challenges.

“At 10 a.m., the sun reflects off the lake, creating a terrible glare. We have to turn back. Even at 7 p.m., the surface of the lake is still above 35 degrees Celsius,” Zhang said. “The work is difficult, but I am satisfied because I see that the lake is getting clean.”

Leaves and aquatic weeds frequently clog the lake outlets that Zhang and her colleagues have to clean for two hours every work day. If a typhoon hits the city, they have to unclog the outlets every hour.

Debris such as dead fish, leaves and branches, and trash thrown by tourists impact the water quality of the lake. After collecting the garbage, workers sort it and transport it to microbial treatment machines.

Other heroes working in the heat include patrol boats along the Qiantang River, which has what is believed to be the world’s largest tidal bore.

When the tide flows into the mouth of the river from Hangzhou Bay, the waves can reach a height of 9 meters.

The tides rise twice a day all year round, sometimes so quickly that people get stranded, and this can pose a potential danger to the public at any time. They are to warn out-of-town visitors who thought they might flee the rising tide and remind fishermen on a T-shaped weir that they might also be surprised by a low tide.

Sun Jia and his team have been working to ensure safety on the river for years.

It takes several hours to inspect the Jiuxi section, and they patrol several times a day. The scorching weather causes their uniforms to remain constantly soaked. 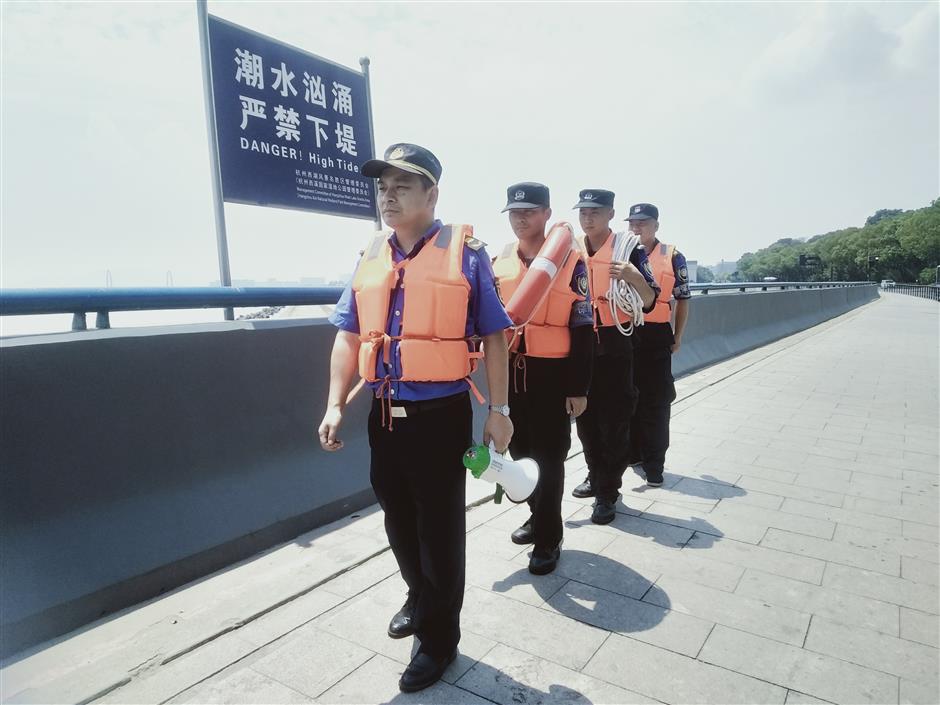 Sun Jia (left) leads his team on patrol in the Jiuxi section of the Qiantang River several times a day.

The local government has set up a station where patrollers work on shifts to oversee surveillance cameras along the river. But they can’t just bathe whenever they want.

“The sense of responsibility is paramount. The safety of the river is linked to every tourist. We cannot let our guard down,” Sun said.

On August 2, 2007, about thirty people were swept away by the tides and 11 of them died. In 2019, one of the three people taken from the Xiaoshan section died.

The average water level of Qiantang River is about 4 meters. Usually, the biggest waves appear in the first and third weeks of each lunar month. It has been calculated that the average thrust per cubic meter of water is 7 tons. The water can rise up to 7 meters if a typhoon adds weight to peak tidal forces.

The tides are best observed in September and their maximum is often around the 18th day of the eighth lunar month. As the days approach, Sun and his team are stepping up their patrols in tandem with the police and traffic authorities.

The Daily Herald – Essential services can reopen at 2pm